An earlier blog post I did was all about the podcasts I like to listen to while quilt. I listen to podcasts quite a bit and sometimes I go through all the new episodes of shows that I subscribe to. When this happens I will listen to audiobooks.

I have a subscription to Audible and anytime they have a sale, I use the opportunity to snag some audiobooks. Below are some of my favorite listens.

Ready Player One by Ernest Cline

Recently made into a major motion film, Ready Player One is set in 2045 and is about 18-year-old Wade Watts who escapes the desolation of reality through a virtual reality program called the OASIS. When the creator of the OASIS dies without an heir, Wade, along with the rest of the world, sets out to find an “Easter Egg” hidden somewhere in the OASIS universe. Whoever finds the Egg first will inherit a massive fortune and essentially control of the OASIS.

Riddled with references to 80’s pop culture such as Star Wars, Pac Man, Blade Runner and Rush, Ready Player One is made for those of us who grew up in this decade. Narrated by Wil Wheaton, this audiobook had me rolling with laughter and reliving bits of my childhood. Yes, I am a big nerd and if you are too, you will love this book. If you can, read/listen to the book before you see the movie!

Where’d You Go, Bernadette is about an eccentric woman named Bernadette who lives in Seattle with her husband and her 15-year-old daughter, Bee. One day after Bee announces that their family trip that year would be to Antartica, Bernadette suddenly vanishes. Told from Bee’s perspective, she collects emails, official documents and various other correspondences to try to figure out what happened to her mother. Both mystery and comedy, once I started this book, I had a hard time doing anything that wouldn’t allow me to listen at the same time. 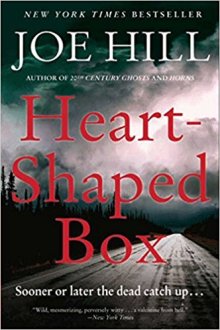 If horror is your thing, then this book is for you. Judas Coyne is wealthy aging death metal rock star who is known to collect macabre items. When he buys a ghost online, the seller sends him the dead man’s suit inside a black heart-shaped box. The ghost however, isn’t content to just linger around the house making spooky noises… I listened to this book around Halloween and it is a creepy thriller. *This book is definitely not recommended if you have little ones around listening with you.